​The Truth About Smiling Dog Farms...​

Smiling Dog Farms is a sanctuary --

a place for the dogs no one else wants or can handle,

and dogs who would otherwise face euthanasia.

They have come from shelters, other rescues and individuals.

Many are adoptable and some are not.

Every dog is up to date on shots, including rabies vaccinations.  We are at the vet office several times a week.

Every single dog at Smiling Dog Farms has been examined by a licensed Texas vet.

Spay & Neuter: Most of our dogs have been spayed or neutered.

another dog who has been altered.  Dogs living at the farm do not have

15 fat) in feeder bins, which allow them to free feed.

Prior to October, 2014, we provided bread product which we obtained

from Mrs. Baird's Thrift stores.  It was a mixture of bread, muffins,

cinnamon rolls, pies which gave the dogs a treat -- something extra, above and beyond their kibble.  Since receiving a complaint about giving the dogs this treat, we have stopped.  Our dogs no longer receive this extra treat and no bread product has been brought onto the property since the end of September, 2014.

farm.  A building program was begun to replace housing and

move dogs from the back, which we had sold.  During

construction, we created temporary "tee pee" housing while the

new houses were being built.  These tee pees were very temporary

and are no longer in use by any dogs.

The larger, "townhomes" are for the sanctuary dogs who will live

out their lives at the farm.  The new housing is primarily for

adoptable dogs who will be moving on to families.  All housing

provides a play yard large enough to move around and run in,

​as well as a house for protection from the elements.

Grounds: During the summer months, weeds and grass grow rapidly in South Texas and we hire extra personnel to knock down the weeds and keep the grass cut.   During the construction phase, referred to above, the weeds became a problem but as we have completed construction, we have the yards well groomed again.  Yards are raked regularly.

Sickness: At any given time, there will be dogs who are sick.  Our

veterinarian works with us to create a treatment plan.   During the

summer months when there is so much pollen in the air, some dogs

have issues with eye discharge and it is treated with an eye ointment.

Dogs who have mange or other skin issues, including skin allergies, are

also treated.  Our workers have a Med Chart that guides them on

treatment plans for each dog.

Some dogs will lose weight when they get certain kinds of worms, and

back on.   Some dogs are elderly and just can't keep on weight like they

did when they were younger, but they are still healthy according to our vet.

Workers:  We have a paid staff who feed, water and care for our dogs.  Neither Ricky nor Jay are paid.

Adoptions: We have many good natured adoptable dogs.  We welcome the help of other legitimate rescues to find great homes for them.  And we're always looking for adopters. Just contact adoptions@smilingdogfarms.org​ 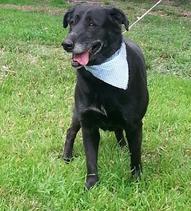 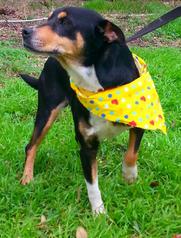 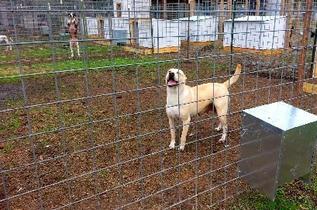